#CalfWatch14 is upon us and soon on many farms and ranches around the country new born calves will be running around with their cute little fuzzy faces and uncoordinated frolics. 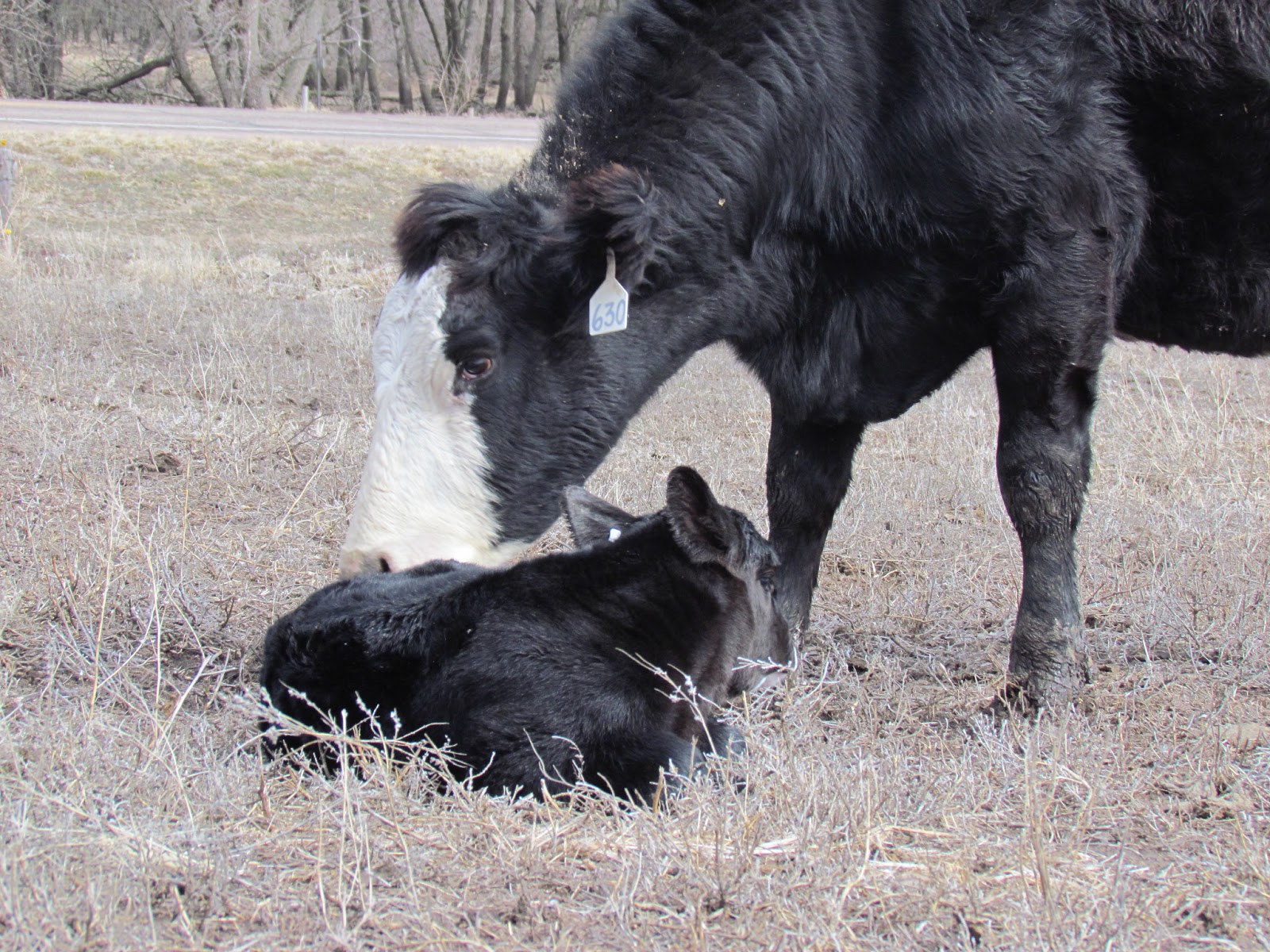 Caution: This video is REAL LIFE on our farm shot last year during #CalfWatch13.

I have received several questions in the past year as to what is happening at about the 1:50 mark in the video. Like I mention in the footage, most times cows give birth all on their own but sometimes they need a little help, just as humans do. This particular cow had been trying to push out her calf on her own for awhile and if my dad had not stepped in to help her, the new little calf would have easily died.

In the video you see a calf puller similar to this one.

Also an O.B. chain similar to this one. 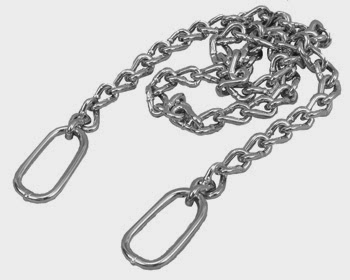 My dad reaches inside the cow and wraps the chain around the bottom of the calf's legs then attaches the chain to the ratchet on the calf puller. My uncle then slowly begins to ratchet as my dad helps the calf slip out of the cow as she pushes.

Now, for the average viewer, this may seem cruel and unnatural.  But I can easily tell you the names of several grown men who watched their children being born that I guarantee probably thought "What The... is happening to my wife?" during the births.

Its all part of the natural cycle, birth is a intricate process that brings life to world and sometimes assistance is needed for the mothers. And in the case of cattle, a new born calf weighs around 80-100 lbs. Without the help of the above tools there is no way that my dad could have reached inside this cows uterus and pulled out a 90 lb calf on his own. I don't know if you have ever been an arm deep in a cows uterus, but its a bit slippery in there. So these tools are essential to helping during the birthing process for cattle. And that's all my dad is doing in the video, helping a mother give birth.

So God Made a Farmer…the extended version!

This video will not disappoint!

Now I may not be a "farmer" by career choice, but being raised by farmers and being involved in agriculture daily  sure makes me thank God that he made farmers.

And on the 8th day God looked down on his planned paradise and said, “I need a caretaker”. 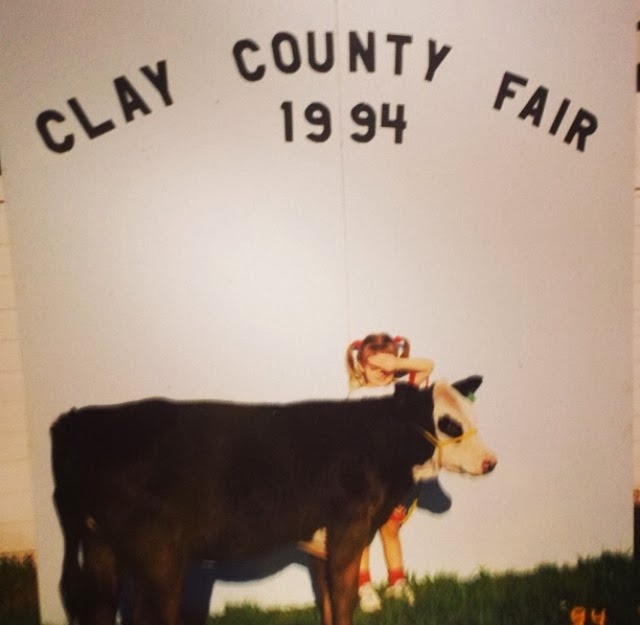 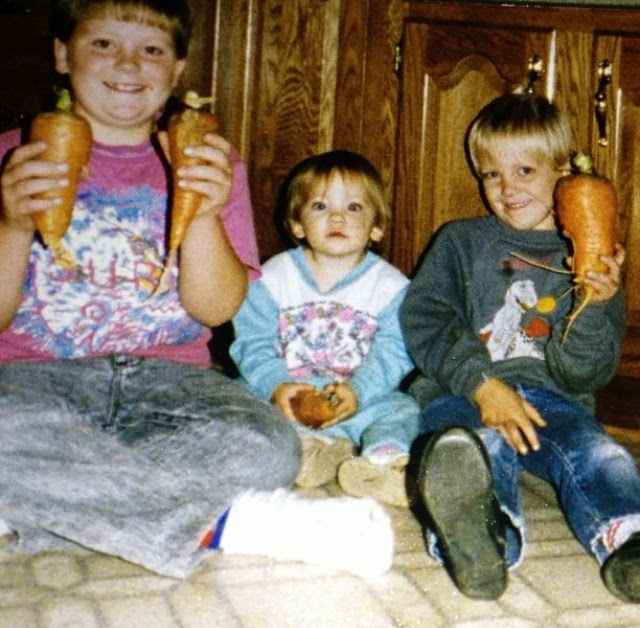 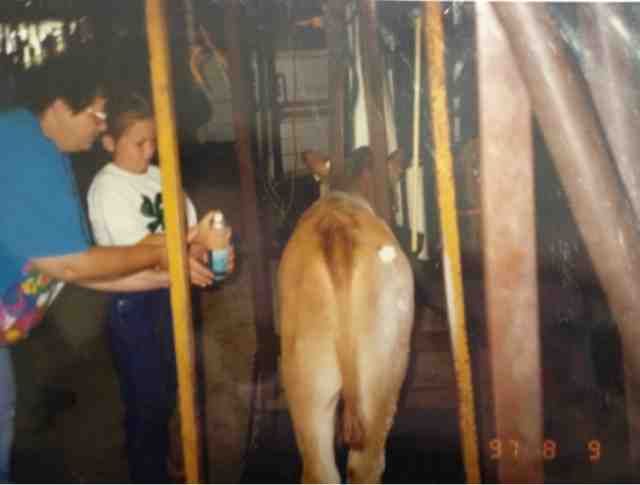 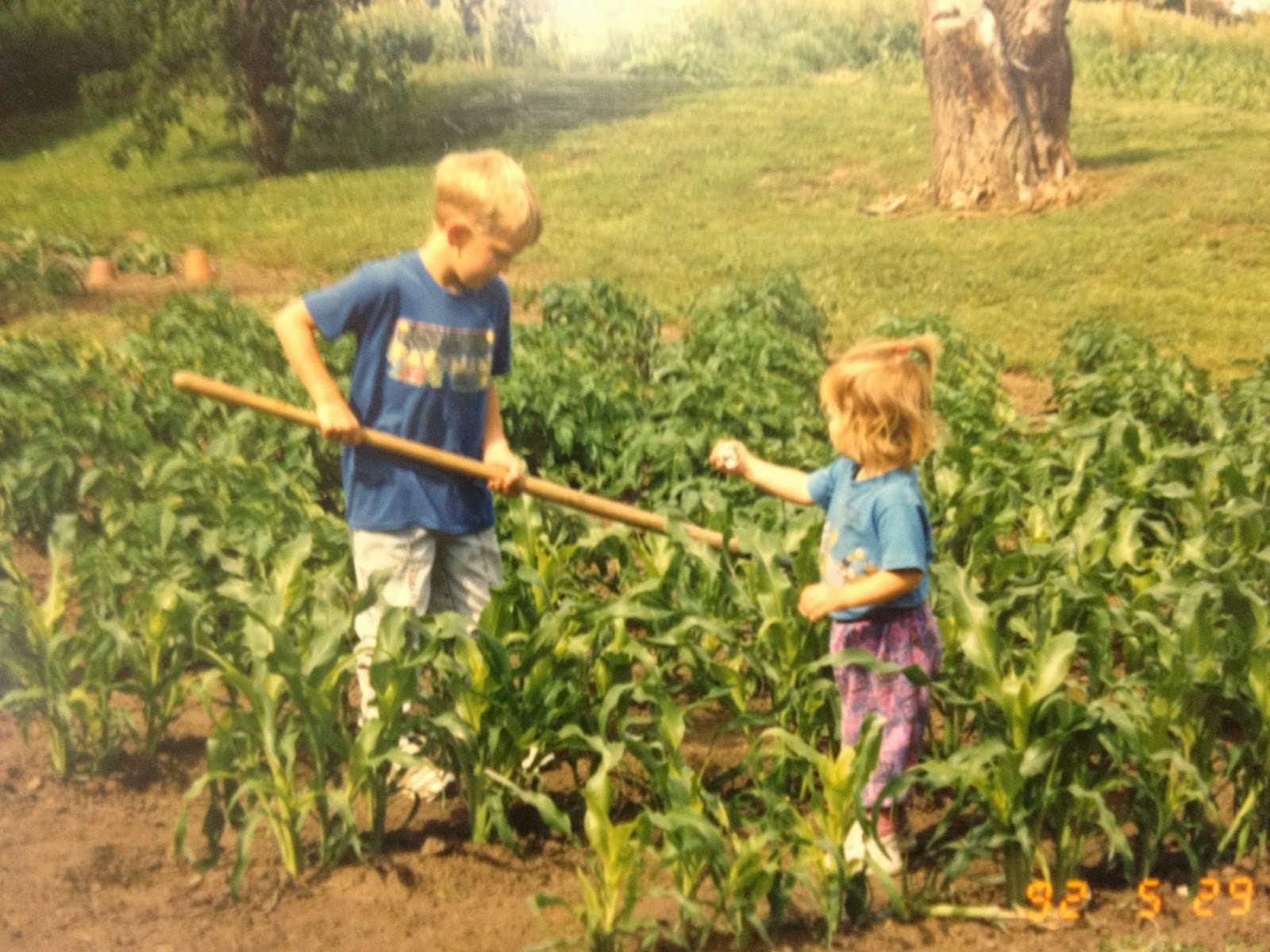 Posted by Ashley at 4:22 PM No comments:

So I may have wrote this last year, but in light of all the media attention and scrutiny so called "factory farms" are getting and since today at the Food Dialogues they are discussing "Farm Size: Does It Matter?", I felt the need to post this again. 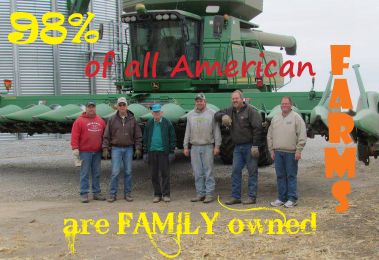 Big is celebrated in many ways because it often equates to success. But for some reason in today's world, big farming often gets a bad rap. I ponder this everyday, and especially when I get the opportunity to share with someone what my family does for a living.

Farming and the Nunnenkamp family goes together like peanut butter and jelly. I was never fortunate enough to know my great grandparents but they starting farming the American soil when they immigrated over to the U.S. My grandpa Fred is the oldest of 11 children and I am pretty positive he was born knowing how to farm. Except for a few years where he was overseas serving our great country in World War II, he has spent his life tilling the soil and turning seeds into success. Now 96 years later (he will be 96 in a few weeks, so Happy Early Birthday Grandpa!), he is still doing what he was born to do, FARM. Except now, he has his sons and grandsons by his side, and some days even his great grandson. We are a FAMILY FARM and darn proud of it. 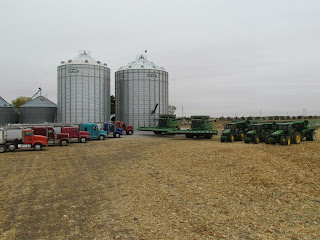 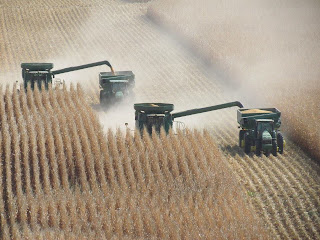 In order for farmers to work together and farm as a family, operations have to evolve and grow.  Just because we are bigger than most does not mean that we do things different than any other farmer. We still have the same practices and take care of the environment.  We are stewards to the land and work hard to grow crops the best that we can. It literally breaks my heart when I hear someone say that big farms are, I cant believe I am about to say this F word, "Factory Farms". Yes, we have 450 head of cattle but we raise and care for them the same way as if we had 50 cows.  Yes we have 8,000 acres of crops, but we grow and care for them with the same passion as if we only had 1,000 acres. Just because one farm is bigger than the other doesn't mean one is bad and one is good. We need all kinds and types of farms to create diversity and feed our ever growing world. So it is not fair to label big farms as bad or "factory farms".

Being a farmer is NOT an easy job.  There are no weekends off or paid holiday vacations.  The farm doesn't close at 5pm or open at 8am.  It is 24/7.  I was once told that farming is not a job, it is a lifestyle. And that is a fact. My family lives and breaths farming, and agriculture in general. And the best part is that we all breath it together.  Working alongside your family is one of the greatest blessings a person can have.  I am sure there are days when my dad thinks my brothers are idiots or that everybody else thinks that dad is being bossy, but at the end of the day I am sure I can speak for them when I say that they wouldn't change it for anything.

So I guess to sum it all up, in the Nunnenkamp family, there are some F- words we like, some F-words that get dropped when they shouldn't on the farm, and some F-words that definitely don't describe us. But at our farm, F stands for FAMILY.

Blizzards suck, but odds are that we will probably be alright.


Blizzards suck, and here's why.

Last week, winter storm Atlas struck parts of Nebraska, South Dakota, and Wyoming.  An intense blizzard blew though the area dumping rain followed be several inches, and in places several feet, of heavy wet snow followed by severe winds. There are some reports that places in South Dakota received up to 58 inches of snow and almost hurricane-force winds. All those things combined and you are left with the result of one of the craziest winter storms most have ever heard off.

Amid all of the difficulties this much snow brings, shutting down I-90 and paralyzing towns, many ranchers took a direct blow from the storm. Estimates are that upwards of 95,000 cattle, horses, and livestock perished in the storm. That means many ranchers lost all of this year’s calf crop and a good majority of their cow herds. Many livestock were out on Summer and Fall ranges, sometimes miles from winter pastures where shelter is better suited for winter storms. Even horses and livestock in pens closer to the house perished in the feet of snow, strong winds, and cold that came this early in the season. Many cattle trailed with the wind and when they found shelter, many were buried when snow drifted and covered them. In most cases, there wasn’t much that could be done. (Now if you are thinking, What?! What do you mean not much could be done, please stop and continue with this post.)

Now one would think, OMG, this is devastating, heart wrenching, something that our nation needs to know about. These people need help! Somebody call CNN, FoxNews, MSNBC, CBS, Wall Street, anybody with a pen and paper!

Well instead of covering stories about the actual people of this country and more importantly, the people that are feeding this nation, our national media is more interested in our dysfunctional government. Who is actualy no help to these ranchers. We have no farm bill, farm service agencies are shut down, and no government assistance due to the shutdown.

But since a good majority of our national media doesn't seem interested in doing their job, the agriculture community will do it for them.

A single glance threw your Facebook news feed and I am sure you will find tons of links to blog posts by brave ranchers sharing their stories of survival and loss. Thousands and thousands of cattle were lost in that intense blizzard. Cattle that are the heart and soul to many ranchers. These people have spent years building their herds and they care for their livestock with all they have. These animals are their livelihood. So for their entire lifestyle to basically be wiped out overnight, is devastating. And for people to be brave enough to come forward and talk about their loss, is truly honorable.

I love being part of the agriculture community not just because of what we stand for and what our purpose is but because of how we band together in times of need. No matter our differences of opinion, when one of us falls, we help to build each other up and support our brothers and sisters in ag. 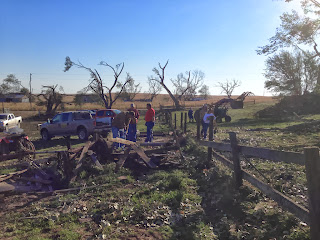 Last week,while the north west corner of Nebraska was getting pounded by a blizzard, our north east part of the state was getting ripped apart by a EF4 tornado. immediately after, pictures started rolling in of fellow farmers helping rebuild fence, collecting tin and metal from corn fields, cleaning up debris from collapsed farm buildings, and cattlemen showing up to grill several thousand hamburgers for clean up volunteers.

This blizzard is no different, fellow ag-peeps are coming out of the wood works to help share the story of these affected ranchers and help gain the attention of the public, the media, and our government. Neighbors helped neighbors dig out of the snow and search pasture after pasture hoping to find live cattle and helping each other cope with the heartbreak of finding cattle buried under feet of snow.

That is plain proof, that the agriculture community is strong and no matter what storms blow our way, Odds Are That We Will Probably Be Alright.


We are proof that even when our country is in a bit of government shambles, we take care of our own. There has been a Ranchers Relief Fund established to aid the S.D. folks impacted by this storm. Here in Nebraska, the Chadron Community Foundation has created the Cattlemen Relief Fund in which donations can be sent to  PO Box 1125, Chadron NE 69337.

So in closing, I would just like to tell all the ranchers affected by Atlas, that you will be alright. You will get through it. It won't be an overnight fix, but only time will help rebuild from this disaster. But don't fret, because we got your back!